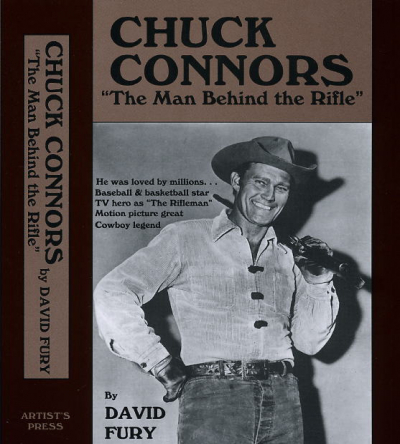 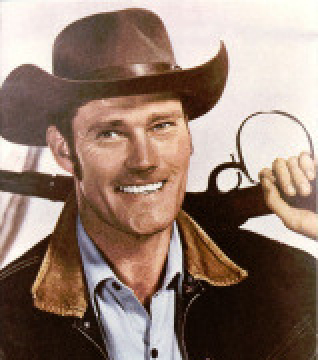 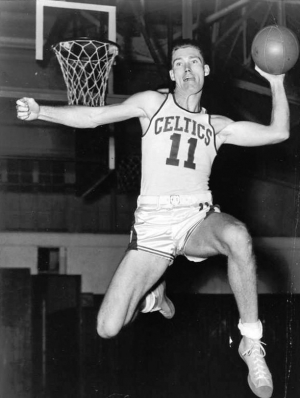 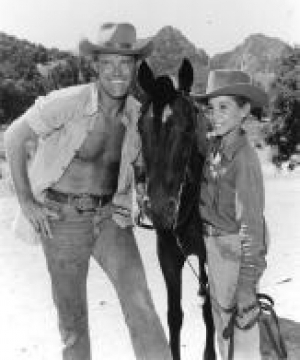 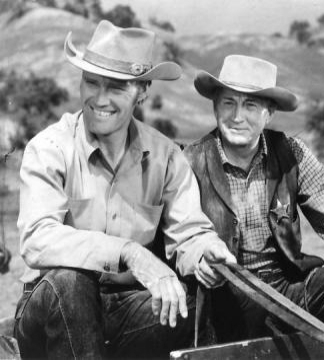 REVIEWS for "Chuck Connors: The Man Behind the Rifle"

...is very obviously a labor of love. That same energy and enthusiasm is evident in David Fury's "Chuck Connors: The Man Behind The Rifle" Readers will recall that some years ago, Fury wrote, designed, and published a book on Burt Lancaster. His latest work is similarly self-published and self-designed, but that is not to imply in any way that here is an unprofessional work. Both in appearance and in content, it is the equal of any volume from a mainstream trade publisher.
With enthusiasm and respectful affection, David Fury documents the life and career of Chuck Connors. He discusses Connors early sports career, beginning with the Brooklyn Dodgers at the age of 19 in 1940, and ending with his retirement from the Los Angeles Angels in 1952. It is, of course, for his acting career that Connors is best known, and I am surprised at just how substantial that was. Fury notes 71 feature films and made-for-television movies, together with countless television guest appearances and starring roles in seven television series. The most famous of the last is The Rifleman, which ran from 1958-1963, but I had forgotten how good Connors was in the short-lived but excellent series, Werewolf in 1987-1988.
David Fury spoke in depth to Chuck Connors and also learned much from his colleagues and his business associates. The discussion of the various roles is detailed, perhaps at times a little too uncritical but on the whole fair and balanced. The author does well in capturing the spirit of his subject. The biography is profusely illustrated and includes a detailed filmography, information on sports career statistics, and even a listing of Chuck Connors memorabilia. A nice tribute from a fan who knows how to deliver a work of quality and readability.

"Fans of TV Westerns can spend some happy hours with David Fury's "Chuck Connors: The Man Behind the Rifle." Chuck Connors was a professional baseball player for the Brooklyn Dodgers and Chicago Cubs before being bitten by the acting bug. The 6-foot-6 Brooklyn native appeared in films such as Pat and Mike with Katherine Hepburn and Spencer Tracy, and The Big Country with Gregory Peck before achieving his greatest fame as sharp-shooting widower-rancher Lucas McCain in The Rifleman (ABC; 1958-'63). According to "The Man Behind the Rifle," Connors landed the lead in The Rifleman over other actors such as James Whitmore thanks to a small role in Walt Disney's Old Yeller. Although only appearing briefly in the family film, Connors impressed the TV producers with the way he related to 13-year-old Tommy Kirk. The Rifleman required its star to look natural on screen with 12-year-old Johnny Crawford, who was to play Lucas McCain's son, Mark. After seeing the natural charm Connors displayed in Old Yeller, the producers wanted the athlete-turned-actor so badly that they offered him a five percent ownership of the show and the McCain role.

Chuck Connors as “The Rifleman” brought a fundamental moral message to TV screens that is missing today. David Fury’s authorized biography, CHUCK CONNORS: THE MAN BEHIND THE RIFLE, builds a 6’ 6” portrait of a highly extroverted, fun-loving guy with an often gruff exterior—but soft hearted in his own way. Connors was serious about his work but saw humor in all situations. As Gene Barry says, “He definitely traveled to the beat of his own drummer.” Fury began his bio with full cooperation and input from Connors, unfortunately “The Rifleman” died before the really detailed conversations could commence. Nevertheless, Fury finds Chuck’s personality through anecdotes and memories from over 40 personalities who crossed trails with the man in sports and entertainment—Johnny Crawford, Vin Scully, Charlton Heston, Gregory Peck, Robert Stack, Richard Anderson, Stan Musial, Andrew Fenady, Patricia Blair, Joan Taylor, Arnold Palmer and others give us real glimpses of the athlete/actor.

Chuck Connors: "The Man Behind the Rifle" By David Fury
Information for the series history above came largely from David Fury's 1997 authorized biography Chuck Connors: The Man Behind the Rifle". Fury had the opportunity to interview Connors near his death and had access to Connors family archive of personal papers and photos.
Chuck Connors was more of a phenomenon than his role as Lucas McCain might suggest. He was born in Brooklyn, N.Y. April 10, 1921, and spent his youth developing his athletic prowess playing baseball and basketball. He went on to play professionally with the Brooklyn Dodgers and Chicago Cubs. In basketball, his career was spent with the Rochester Royals and the Boston Celtics. He was a better actor than athlete, although he said on several occasions that he would rather have been another Stan Musial than a Clark Gable. But he performed both careers with ease. He told Coronet magazine in 1959, "Handling a rifle or a baseball bat takes coordination and practice, that's all."
His first role in a motion picture was as a police captain in the 1952 comedy PAT AND MIKE with Spencer Tracy and Katherine Hepburn. He played another policeman in CODE TWO (1953) with Keenan Wynn, and in TROUBLE ALONG THE WAY (1953) he worked with John Wayne and developed a friendship. But his greatest experience as a beginner was with Burt Lancaster, who taught him much about his craft and the business of being a movie actor, during the filming of SOUTH SEA WOMAN (1953). Other work followed quickly as Connors developed skill and ease in front of the camera. Valuable experience in television in 1953 came by way of his supporting roles on THE DENNIS DAY SHOW, PRIVATE SECRETARY (Ann Sothern's sitcom), and TOPPER.
His most memorable television role from this period was on THE ADVENTURES OF SUPERMAN as Sylvester J. Superman, an extraordinarily strong country bumpkin who comes to Metropolis with his mule in response to a newspaper ad asking for Superman's help. Connors was working steadily in movie and television roles when he was hired to star in THE RIFLEMAN. Following the cancellation of that series, he went on to star in several others, including ARREST AND TRIAL (1963-1964), BRANDED (1965-1966) COWBOY IN AFRICA (1967-1968), THE THRILLSEEKERS (1973-1975), THE YELLOW ROSE (1983-1984) and WEREWOLF (1987-1988). He was working on taping THE AMERICAN SHOOTER episodes as host when he died of lung cancer on Nov. 10, 1992.

Through the years he was able to contribute many memorable performances in TV movies and motion pictures, such as slave master Tom Moore on ROOTS (1977) and as the maniacal Slauser in TOURIST TRAP (1979). Fury delves into every area of Connors' careers and private side with deep respect and sensitivity. His appendices cover Connors' sports statistics, filmography of more than seventy films, TV series and stage work.